Based on his video submission (two posts below) of the White Chocolate Grill’s hardwood grilled Citrus Soy Glazed Salmon, he was selected as the winner of this week’s “Ultimate Hometown Grill Off”. 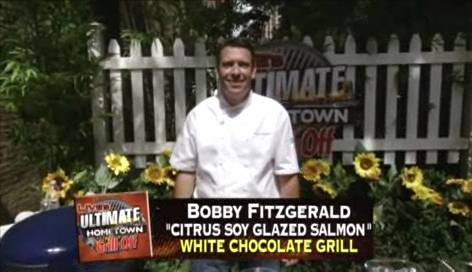 I connected with Bobby briefly earlier this week and he was clearly very excited about this opportunity.  Of course, if you saw the segment it was easy to see that he felt right at home and handled it like a seasoned pro.

Congratulations again Bobby.  For the rest of my Naperville readers, if you are wondering what all the hype is about, why not head over to White Chocolate Grill in Freedom Commons (off Diehl Rd.) this weekend and find out for yourself.

A quick footnote to my posting below, it’s official… Bobby Fitzgerald, Chef Owner of White Chocolate Grill, will be featured on Live with Regis and Kelly tomorrow, Friday, June 26th.  Congrats Bobby, I can’t think of anyone more deserving.  If you would like to sample his winning hardwood grilled Citrus-Soy Salmon recipe, head on over to White Chocolate Grill.  SM

As summer has abruptly heated up over the last couple of days, so has the pipeline of World of Naperville postings.  There were two big pieces of news I wanted to get out and wasn’t sure which to post first, so I decided to post both as a first-ever World of Naperville Double Feature.

First, with fingers crossed, an overdue congratulations to White Chocolate Grill Chef-Owner Bobby Fitzgerald on being a finalist in a recipe contest which could land him a special appearance on Live with Regis & Kelly later on this week.  If you haven’t eaten at the Naperville White Chocolate Grill, what are you waiting for?  Get over to Freedom Commons now for one of the most unique culinary experiences Naperville has to offer.

I’ve gotten to know Bobby over the past year and have to say that I think I’ve met my match in terms of energy, vision and goals for one lifetime.  At an age not far from my own, he’s really making his mark and is on the rise in the U.S. restaurant industry.  Below is a sneak peek at the video submission in which Bobby manages to get upstaged by his adorable “chef apprentice” daughter.

My second post is regarding what I personally find as one of the most exciting new business announcements for Downtown Naperville.  First, allow me to premise what I’m about to say by reiterating that I’m generally not a big fan of national chain retailers taking up space in Downtown; however, this one is a big exception on a personal level.

The final renovations are nearly complete as Apple will be giving Naperville it’s very own Apple Retail Store which will be located in the former Sharper Image space on Jefferson Ave. just west of Main Street.

As you can see, in celebration I’ve proudly posted a photo of my own Mac G5 tower  to the right.  Perhaps it’s a “Mac thing” but the great value of Apple Retail Stores is not merely the fact you buy Apple products, such as Power Macs, iMacs, iPods, and of course iPhones, but most importantly the on-site training which is typically provided at each store.  Needless to say, I’m always looking to expand my knowledge of Apple and related products and software.

I don’t have a firm date, but I believe I heard the Naperville Apple Store will open its doors sometime in August.  SM

Naperville Photo of the Week – The Amazing Shrinking Millenium Carillon

Here’s a Naperville image I captured that proves that things are not always quite as they may seem.  There resides an excellent moral to this photo of a Riverwalk lamp post which appears to tower over the Millennium Carillon at Rotary Hill.

In life, sometimes things are not always as they appear.   As a matter of fact, many situations in life are quite different than the assumptions we draw at first glance.

I am reminded of a favorite story I once heard that reinforces this very lesson.  There was a man who was relaxing by a pool during a much needed vacation in Florida.  He turned his chair away from the pool to enhance his relaxation.  All of a sudden, he heard someone jump in the pool, leaving a big splash in their wake which sent pool water flying up onto the man.  After entering the water, there could be heard playful thrashing all around which continued to splash water upon the man.  At first, he tried to forget what was going on behind him but soon it was unbearable.  Angry from the relaxation this apparent horseplay was robbing from his vacation, he arose from his pool lounge chair and turned around to the confront the inconsiderate trouble-maker.  However, when he turned around, much to his shock he saw that the person he thought was being disrespectful was actually drowning.

A very different reality.  When it comes to Naperville, it’s important for us all to not judge the proverbial “book” by its “cover” no more than we want those who live outside of Naperville judging us just because we live in Naperville.

Sometimes, the slighest shift of perspective can make your world look very different.  If a difficult situation or person in life is weighing heavily on you, why not reach out and engage the problem or the individual head on to determine the actual truth.  You just might discover that the whole situation was not quite as it appeared.  It just might change your life.  SM